How to open your browser from bash on Windows (WSL), GNU/Linux, macOS and Solaris

Sometimes it can be useful to open a browser from your bash. I have developed a bash function that does exactly that - and since I am a fan of multiple operating systems - the function works not only on GNU/Linux, macOS, and Solaris but also on the bash on Windows as part of the WSL (Windows Subsystem for Linux).

To use the function in your bash-script, simply source the file that contains the function - I called the file network.include. You find the file as well at the repository of my tiny project called bashberries - that is a tiny collection of both bash scripts and bash includes, released under the terms of the Apache 2.0 license. The script below calls the function from above and opens the homepage to bashberries:

Update Oct 23, 2017:
uname -r is not reliable enough, it does not work on the wls beta with Ubuntu 14.04 for example, better is to do a cat /proc/sys/kernel/osrelease

Posted by Johann N. Löfflmann at 10:19 PM No comments:

macOS: To use the java command-line tool you need to install a JDK - are you kidding me?

Recently I detected an error message on macOS saying that it seems to be required to install a JDK in order to just use the java command-line tool. A JRE is not enough? Really? Are you kidding me?

The screenshot below shows the error message in German: "Um das java-Befehlszeilenprogramm nutzen zu können, musst du ein Java-Entwicklerpaket installieren." In English it means: "To use the java command-line tool you need to install a JDK".

Since I am a developer, I always installed the JDK on my Mac and I detected that phenomenon very late. Actually the web is full of those traces - however, without a suitable solution in my opinion. Well, I simply don't want to tell my users to install a JDK if a simple JRE is enough. Any existing JRE on the system should do the job in my humble opinion.

Here we go, here is my little bash launcher that tries its best to launch java even if you have installed a JRE only on your Mac:

The script checks for the JAVA_HOME environment variable and if that is not set, it checks for any registered JDKs by calling /usr/libexec/java_home and if that didn't return anything, it simply uses the JRE that could be available at a well known path on macOS (tested with both Java 8u131 and Java 9-ea) and if that fails as well, it uses java and if even that fails it means you really don't have any Java installed and you should get the error message above again.

I use the launcher above already as part of the Jacksum macOS Finder integration. See also
http://jacksum.net/de/tutorials/integration_jacksum_osx_finder.html

Feel free to use the launcher script for your Java app as well if it meets your needs.

Posted by Johann N. Löfflmann at 11:17 PM No comments:

Three weeks ago I posted Solaris' pargs, penv, pfiles, pmap, and pstack on GNU/Linux and since I am also a Mac user, I thought it could be a good idea to have those commands also on macOS. Here we go ...

Since there is no access to a proc file system on macOS (at least not by default), both pargs and penv call the ps command and pmap calls vmmap. Furthermore pwdx calls lsof with the current working directory descriptor request in order to get the required info. Since "ps wwe" returns not only the environment variables for the given process but also the program arguments on macOS, we need to strip the program arguments from the output. This has been done by calling pargs, determining the length of that output and cutting that length from the string again before we pass it to the tr command that gives us an environment variable for each line. For blog purposes I have shortened the variable names, L stands for line and C for count.

I really like the p-commands on Sun/Oracle Solaris and I miss those on GNU/Linux. Therefore I have gathered/created rudimental equivalent one-liners that work on a PID.

I have added the following functions to my ~/.bash_aliases file that is being sourced by my ~/.bashrc. pargs, penv, and pmap are gathering the proc file system, while pfiles and pstack are calling lsof resp. gdb.

Note that due to a kernel hardening (ptrace protection) on Ubuntu 10.10 and later you need to call gdb under the control of sudo, or alternatively modify the ptrace_scope property. See also https://wiki.ubuntu.com/SecurityTeam/Roadmap/KernelHardening#ptrace_Protection and https://askubuntu.com/questions/41629/after-upgrade-gdb-wont-attach-to-process

Posted by Johann N. Löfflmann at 12:35 PM No comments:

How the NumericalChameleon Installer obtains the latest JRE for Windows

Today I will explain how the NumericalChameleon installer obtains the latest Java Runtime Environment (JRE) for Microsoft Windows.

Below you find a screenshot of the NumericalChameleon installer, localized in German, running on Windows 10 x64 while downloading the latest JRE offline installer: 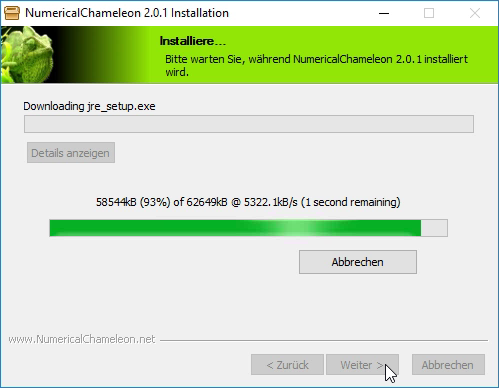 Since the actual locations of the JRE offline exe installers are different for each Java version, and those locations are both unpredictable and volatile, it is important for the NumericalChameleon installer to rely on well known static URIs, because the installer binary cannot be changed/patched anymore once it is deployed on the web.

Those well known URIs are redirects in the .htaccess file on my Apache server actually, and the redirects are being updated every day. I create those redirects by parsing the website that has the locations of the Windows JRE offline installers.

The .htaccess.static file just contains entries that never change. The update_htaccess script runs by cron periodically on the server in order to have entries that are up to date.

After the cron was running, updated redirects can be found in the .htaccess file. In the example below the redirects are from Java 8u121:

The installer can now rely on the fixed addresses below, dependent whether a 32 bit or a 64 bit system has been found:
Now you know how the NumericalChameleon installer gets the latest JRE on Windows.

Hint: if the approach above should ever fail and the redirects are not being created, the current installer will fail with a 404. In that case you can simply install the JRE manually before you start the NumericalChameleon installer. In that case the installer won't even go to the internet, because the condition is met already that a JRE has to be installed.

Posted by Johann N. Löfflmann at 10:20 PM No comments: